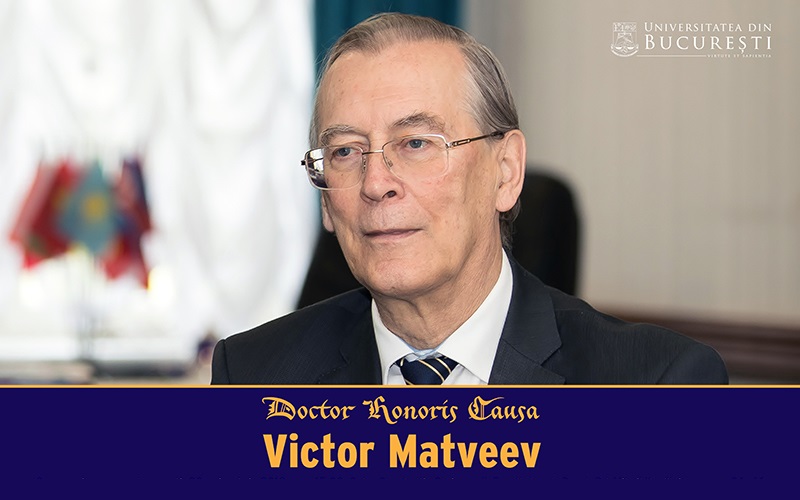 In Laudatio Domino, prof. univ. dr. Alexandru Jipa from Faculty of Physics of University of Bucharest mentioned over 400 articles published in ISI-rated journals and thousands of quotes belonging to the academician Victor Matveev, simultaneously pointing out that the importance of his scientific contribution to Hadron Physics and the Standard Model of elemental particle interactions is related to experimental research conducted at Tevatron (Fermilab, USA) and the Large Hadron Collider (CERN, Switzerland). Chairman of the Collaboration Board Council “Russia and the Member States of Dubna” in CERN’s Compact Muon Solenoid experiment, acad. Victor A. Matveev has contributed, over time, to the creation and development of major research infrastructures at the Nuclear Research Institute of the Russian Academy of Sciences, such as the high intensity accelerator and the experimental complex of the mesons factory in Moscow, the neutrino observer from Baksan or the deep-sea neutrino telescope in Baikal Lake.

In the same time, in Laudatio Domino, professor Jipa highlighted the fact that, under the lead of Acad. Victor A. Matveev, unique experimental facilities in the world were created, such as the neutrons pulse source, successfully put into operation in 1978. Moreover, as director of IUCN, acad. V. Matveev has made enormous efforts to achieve the IUCN mega-research project – the ionic collider based on Nuclotron- able to identify rare, fundamental processes, produced in extreme conditions, on very small dimensions, which allow us to understand the origin of the universe.

Through his entire activity, Acad. Victor Matveev has managed to turn IUCN into an international scientific center open to broad cooperation with other national and international centers and toward the development of a new generation of physicists and specialists.

Prof. univ. Dr. Marian Preda, president of the University of Bucharest Senate, handed the Doctor Honoris Causadiploma to the academician Victor Matveev in recognition of his remarkable work in physics research and for his positive influence on the Russian and international academic community.

In his contentedness speech, the academician Matveev expressed his gratitude towards the UB Physics Faculty for both intense and valuable collaboration carried out over time and for receiving the honorary title of Doctor Honoris Causa from UB.

Further more, the academician Victor Matveev made a detailed description of the structure and activities of the Unified Nuclear Research Institute in Dubna, Russia, insisting both on the extraordinary results obtained over the years as well as on the future projects and scientific perspectives of IUCN. Acad. Victor Matveev ended his presentation with a quote belonging to the writer Anton Cehov, according to which science can not be national, as the multiplication table can not be national.

When a science would become national, it will cease to be science. In this respect, the academician specified that one of the essential missions of science, in whose spirit IUCN operates, is to bring nations together, international collaboration being one of the fundamental values of humanity.

By offering the title of Doctor Honoris Causa to academician Victor Matveev, the University of Bucharest celebrates a remarkable personality, whose contributions in Elementary Particle Physics, Physics of High Energies and Quantum Theory of the Field, but also in the management of an important research center led to uncontested discoveries and innovations in the field.

The entire brochure of the Doctor Honoris Causa award ceremony to academician Victor Matveev can be consulted here.