For Romania’s Centennial, the University of Bucharest brings together in the academic space pupils, students, professors and researchers 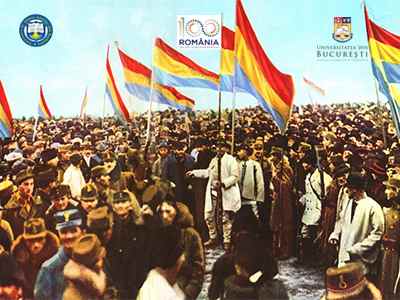 The University of Bucharest, through the Faculty of History, launches on Wednesday, the 24th of January, 2018, on the Small Union Day from 1859, the series of activities for the pre-university education that take place within the programme of celebrations of the centennial of Romania.

The opening event will bring together specialists in history, international relations, security studies, pupils and teachers from Bucharest and other counties in Romania.

During the first part of the meeting, professors of the University of Bucharest, of the “A. I. Cuza” Police Academy of Bucharest and of the “Carol I” University of National Defence will approach various themes such as the principle of self-determination and the new international order in Eastern Europe, as well as the preservation of the historical memory of today’s generation. Attached you can find the full agenda of the event.

During the second part of the event, a series of competitions will be launched for pupils ranging from the eighth to the twelfth grades, under the patronage of the national project entitled “My family during the Great War and Great Union”.

The project, run by the University of Bucharest and by the Romanian Society of Historical Sciences, consists of activities devoted to the recovery of local history from the 1914-1919 period. For this purpose, students will be involved in researching local history, family photos, collecting and digitizing objects, documents, vintage photos, immortalizing local monuments dedicated to the First World War and to the Great Union. They will also partake into a national competition that will test their degree of knowledge of the events from 1918.

“We believe that the main valence of the Centennial is educational, namely the transmission of principles, values and attitudes to the young generation that can be found in the schools. We want the young people to acknowledge and to honour the sacrifices of the forefathers, of the generation that made the Great Union possible. At the same time, we want to reflect on how each of us can contribute to shape Romania’s future”, states Florentina Nițu, Ph.D. Associate Professor, Dean of the Faculty of History of the University of Bucharest.

The event will be accompanied by an exhibition of objects belonging to the soldiers who fought during the First World War. The exhibition is held with the support of the “Military Tradition” Association of historical-military re-enacting and offers the participants the opportunity to learn more about the context of their use.