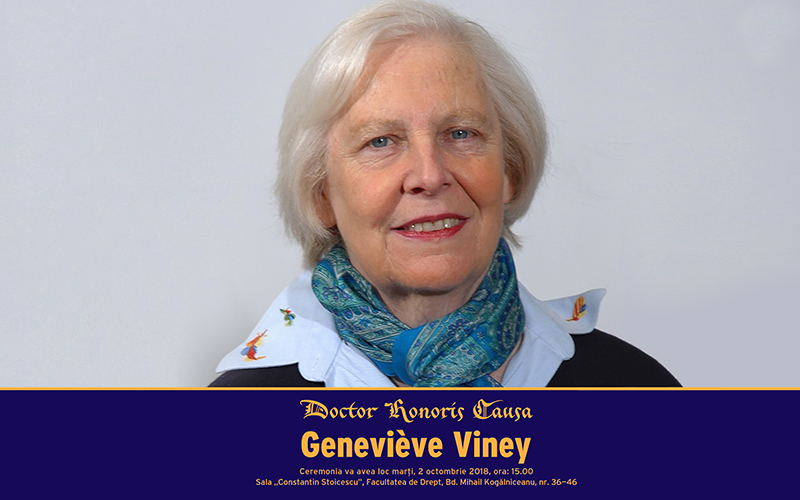 Within a ceremony that took place on Tuesday, the 2nd of October 2018, Geneviève Viney, emeritus law professor at the University Paris I Pantheon Sorbonne, was honored with the distinction of Doctor Honoris Causa of the University of Bucharest for the remarkable activity in French law and compared law.

The event took place starting with 15:00, in Constantin Stoicescu” Hall of the Faculty of Law Palace (36-46, Bvd. Mihail Kogălniceanu).

The scientific activity of Professor Geneviève Viney resulted in numerous national and synthesis reports presented in international congresses, in a multitude of research projects that she coordinated, but also in the semestrial chronicle of jurisprudence of civil liability that she held in La Semaine Juridique for 14 years and the trimestral chronicle „Contrats et responsabilité” she held in Revue des contrats starting with 2006. Also, Geneviève Viney published over 600 jurisprudence studies, articles and comments in many specialty reviews, such as Recueil Dalloz, in La Semaine Juridique, in Revue trimestrielle de droit civil, in Archives de philosophie du droit, in Revue générale des assurances terrestres and in Revue Lamy – droit des affaires. Extremely important for specialists in law are also the treatises published by Professor Viney, as Introduction à la responsabilité, already being at the third edition in 2006, Les conditions de la responsabilité, whose fourth edition was published in 2013 in co-authorship with P. Jourdain and S. Carval, Les effets de la responsabilité, whose fourth edition was published in 2017 in collaboration with P. Jourdain and S. Carval, or Les régimes spéciaux et l’assurance de responsabilité, published in 2017, all included in the big series of Traité de droit civil, leaded by J. Ghestin and published at L.G.D.J.

Geneviève Viney contributed directly to the law reforms that were significant for the civil liability field in the last decades. Thus, she participated for four years at the works of the Commission for abusive clauses control and was part of more expert commissions organized with the French ministry of Justice.

Also, Genevieve Viney initiated and organized international seminars in association with the Private law research center of the University Paris I and the Centre of obligations law of the University of Louvain La Neuve, completed with important works in the field.

As an acknowledgement of the substantial contribution in her field of activity, Prof. Geneviève Viney is Doctor Honoris Causa of more universities and member of Europaea Academia since 1992.

„The worldwide dimension of her thinking, her eminent contributions to a new vision on the social role of the civil liability in the contemporary society and its reception in the Romanian judicial environment have determined the decision of the University of Bucharest to grant her the highest expression of the acknowledgements of her scientific and social merits”, as shown in laudatio for Professor Geneviève Viney.

The brochure of the ceremony for granting the distinction of Doctor Honoris Causa to Professor Geneviève Viney may be accessed here.