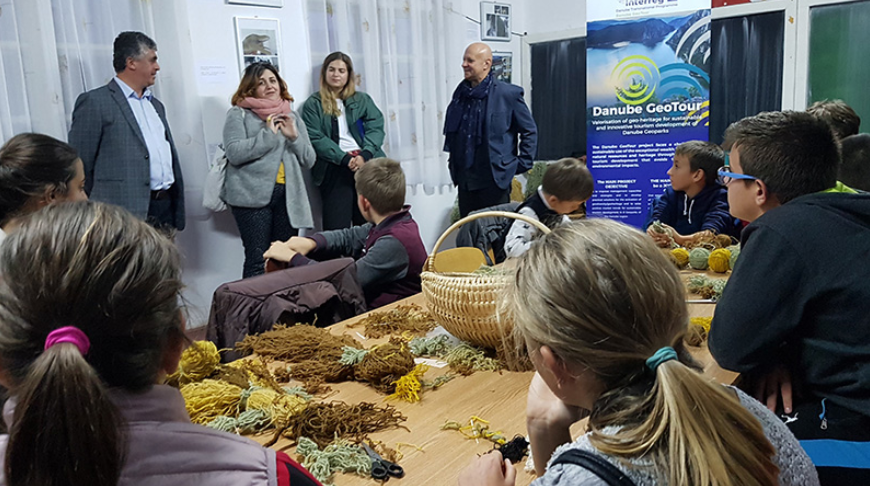 The second edition of the Creative Traditions Forum took place on the 24th -28th of October 2018. Within the event, the geoproducts developed by the „Țara Hațegului” Dinosaur Geopark, the UNESCO International Geopark, administered by the University of Bucharest, were brought to the attention of the attending public.

The forum was organized under the high patronage of the European Commission Representative in Romania, as part of the events celebrating the European Year of Cultural Heritage. The event was organized by DC Communication and Geomedia Association, with the support of the University of Bucharest, the National Museum of the Romanian Peasant, the Romanian Order of Architects, Calea Victoriei Foundation, The Institute, Pro Patrimonio, Piscu School, the National Institute for Cultural Research and Training, along with SNSPA.

This year’s edition of the Forum focused on the importance of cultural heritage elements that can help develop local communities. Participants presented good practice examples focused on education, but also projects developed nationally, aiming to create data bases or public policies in the field of crafts and traditional art craftsmen. The Creative Traditions Forum brought together experts, specialists, creators from various cultural and artistic fields, as well as representatives of creative and public industries, activating in the cultural sector.

The event covered an applied visit to the Geopark and a series of conferences, debates and workshops hosted by The Ark – Future deposit, of Bucharest. Within the practical application hosted by the Geopark, participants could grasp an idea on the concept of geoproduct, as developed within the Interreg Danube GeoTour project (project co-financed by the European Union ERDF, IPA funds). Visits to the Houses of the Geopark and to the “dinostops” – geoproducts produced by the Geopark within the international project – „The story of the wool fleece”, developed by Women’s Association of Sântămăria Orlea (AFSMO), and the story of Andi Andezit proposed by the “Drag de Hațeg” Association, are just a few of the locally created products, that aim to promote local communities and the Geopark.

Using the plant dyed wool fleeces crafted by AFSMO members, the pupils of the Sîntămăria Orlea Secondary School created decorations which can be seen from now on in the Sînpetru Tradition House. Furthermore, the AFSMO representatives organized a tasting session for local products.

The second part of the event took place in Bucharest, themed with: creative traditions within the European Year of Cultural Heritage, natural materials as a resource for creating local identity and heritage related education. Stone made objects – Intangible heritage of UNESCO Global Geoparks exhibition was presented to the Romanian public for the first time, within the Forum. The exhibed objects, coming from member geoparks of the European Geoparks Network, were actual instances of the way in which local geodiversity may influence a community’s identity. Furthermore, the exhibition was a cornerstone event hosted for the first time in Romania, on a national level, by the Geopark in order to celebrate Geology Week, on the 22nd -28th of October.