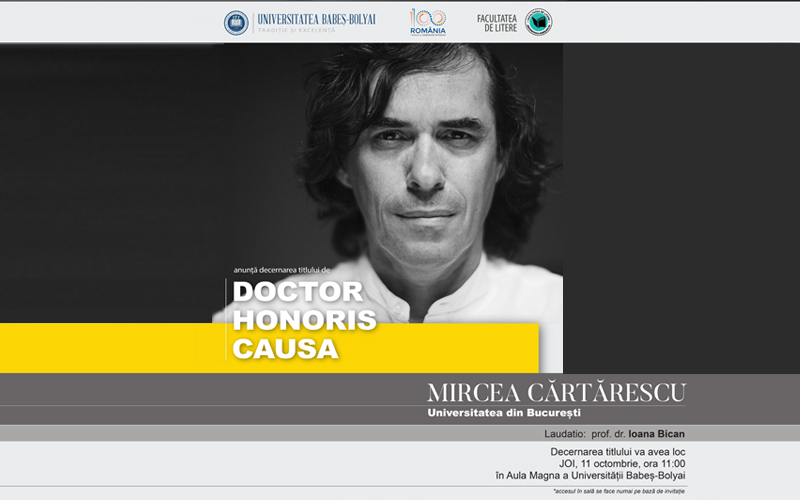 On Thursday, the 11th of October 2018, the writer Mircea Cărtărescu, Professor at the Faculty of Letters of the University of Bucharest, was awarded the title of Doctor Honoris Causa of the University “Babeș-Bolyai” from Cluj-Napoca. The ceremony took place at 11,00, in Aula Magna of  the “Babeș-Bolyai” University, and laudatio was delivered by PhD., Prof.  Ioana Bican.

Important theoretician of postmodernism, Mircea Cărtărescu is characterized by an original style of writing and a tremendous capacity to reinvent himself, going from poetry to narrative and literary critics and back, with an extraordinary easiness. The complexity of his work confirmed him as the best known Romanian writer internationally.

His volumes were nominated in France for the awards Médicis – Le meilleur livre étranger, Prix Union Latine. The novel „Nostalgia” received in 2005 the award “Giuseppe Acerbi”, Castel Goffredo, Italy. Mircea Cărtărescu was awarded, in 2010, the Knight of the Order of Arts and Letters, a prestigious distinction granted by the French state in the field of culture. In 2006, the writer was distinguished by the President of Romania as Great Officer of the „Cultural Merit” Order.

Mircea Cărtărescu was born on the 1st of June 1956, in Bucharest. Graduate of the Faculty of Romanian Language and Literature of the University of Bucharest (in 1980), is currently Professor of the Faculty of Letters of UB. He is a poet, narrator, essayist, literary critique and publicist. His books were translated into English, German, Italian, French, Swedish, Spanish, Dutch, Polish, Hungarian, Ivrit, Norwegian, Bulgarian, Slovenian, Danish, Basque, Russian, Greek, Turkish, Croatian, Serbian, Catalan and were awarded with many distinctions.