Professors of the University of Bucharest, laureates of the Romanian Academy Awards for the year 2015 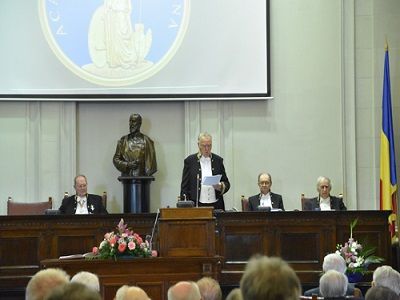 On Friday, the 15th of December 2017, members of the academic community of the University of Bucharest have been awarded by the Romanian Academy for their performance. The award ceremony took place at the Academy headquarters, along with the Presidium Bureau and with the members of the Romanian Academy, brought together through a General Meeting. The awards gratify the Romanian cultural and scientific performance of the year 2015, materialized in individual or collaborative works.

Therefore, the group of works entitled “Architectures structured for the identification of complex biomolecules” pertaining to Camelia Bala has received the “Nicolae Teclu” Award within the chemical sciences section. Camelia Bala is currently part of the staff of the Faculty of Chemistry of the University of Bucharest.

There is also the “Ştefan Hepites” award, which was received by the work entitled “Climate of the Romanian Carpathians. Variability and trends”, pertaining to Sorin Cheval, currently Ph.D. Associate Professor at the Faculty of Geography of the University of Bucharest. The complete list of the 2015 Romanian Academy Awards, awarded on the 15th of December 2017 can be found here.

The awards gratify the Romanian cultural and scientific performance of the year 2015, which is materialized in individual or collaborative works. The Romanian Academy awards 79 prizes, each bearing the name of a renowned personality in the fields of national literary, artistic and scientific creation, categorised on several fields of activity: literature, linguistics, theatre and cinematography, music and fine arts, history, philosophy and psychology, mathematics, physics, chemistry, geography and geonomy, agriculture, medicine or the science and technology of information.

More details regarding the history of the Romanian Academy Awards, as well as the rules of the awards can be found here.