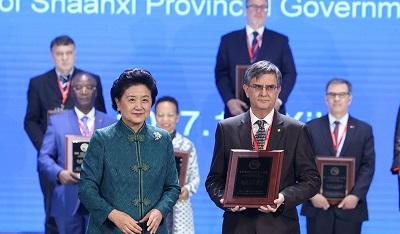 For that matter, it is not the first time that the Confucius Institute within the University of Bucharest stands out among the best in the world. Last year, during The Eleventh Annual Conference of the Confucius Institutes, the Romanian director of the institute, Professor Luminiţa Bălan was awarded the Prize for Excellence, for her remarkable results in promoting the Chinese culture and language in Romania.

Founded in 2013 in partnership with the University of Political and Judicial studies in Beijing, the Confucius Institute within the University of Bucharest has developed a network of Chinese language and culture courses both within the university, as well as in numerous pre-university education institutions in Bucharest and in other cities, such as Galaţi, Iaşi, Craiova, Suceava and Giurgiu. Furthermore, in 2016, the Confucius Institute opened two Confucius Classes, one at the “A. D. Xenopol” Economic College in Bucharest and the other at the “Ferdinand I” College in Bacău, where there are high numbers of students studying the Chinese language.

The activity of the Confucius Institute also stands out through the organization of numerous academic events, such as international scientific conferences, monthly debates on various topics and book launches, thus contributing to the development of the Romanian sinology.