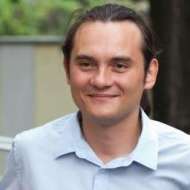 This user has not added any information to their profile yet.

Alexandru Nicolae holds an MA degree (2010) in theoretical linguistics from the University of Bucharest and a PhD degree (2013) in theoretical comparative linguistics jointly awarded by the University of Bucharest and the University of Cambridge (co-tutelle) (supervisors: Prof. Gabriela Pană Dindelegan, fellow of the Romanian Academy; Prof. Ian Roberts, FBA). He is currently a lecturer in the Department of Linguistics at the University of Bucharest and a researcher in the „Iorgu Iordan – Al. Rosetti” Institute of Linguistics at the Romanian Academy. He was also a postdoctoral fellow of the Romanian Academy in the project POSDRU/159/1.5/S/136077 (The Romanian Culture and the European Cultural Models: research, synchronization, durability), with the individual research project A comparative and typological perspective on the syntax of Old Romanian: configurationality. In 2016, he spent 6 months in MIT’s Department of Linguistics and Philosophy as a Fulbright Senior Scholar. He also frequently spends research stages at the University of Cambridge, in various capacities: Visiting PhD student (2013), Visiting Scholar (2015), Erasmus mobility (2014, 2017). Alexandru Nicolae is interested in the morphosyntactic structure and development of Romanian from a comparative and diachronic Romance perspective. He published a single-author monograph on word order and parameter change in Romanian, devoted to the verbal domain (Ordinea constituenților în limba română, Bucharest University Press, 2015) and an extended variant of this book for Oxford Studies in Diachronic and Historical Linguistics (Word order and Parameter Change in Romanian, Oxford University Press, 2019), co-authored a book on semantic variation and change (101 greșeli de lexic și de semantică. Cuvinte și sensuri în mișcare, Humanitas 2011), contributed as a co-author to major reference works such as The Oxford Guide to the Romance Languages (OUP, 2016), The Syntax of Old Romanian (OUP, 2016), The Grammar of Romanian (OUP, 2013), and Gramatica de bază a limbii române (Univers Enciclopedic Gold, 2010, 2016) and co-edited several collective volumes with Romanian and international publishers (Comparative and Diachronic Perspectives on Romance Syntax, 2017; Sintaxa ca mod de a fi. Omagiu Gabrielei Pană Dindelegan, la aniversare, 2016; Perspective diacronice și comparative asupra limbii române, 2016; Diachronic Variation in Romanian, 2015, etc.). In 2012 Alexandru Nicolae was awarded the “Bogdan Petriceicu Hasdeu” Prize of the Romanian Academy for his contribution to Gramatica de bază a limbii române.